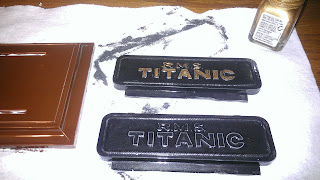 "Take care of all your memories.  For you cannot relive them." - Bob Dylan

"Whenever I think of the past, it brings back so many memories." - Steven Wright

"Every journey into the past is complicated by delusions, false memories, false namings of real events." - Adrienne Rich

I got a model for Christmas.

No, not the kind of model who is female, gorgeous, and boasts a smile that will light up a room.  I already have one of those, was smart enough to marry her a few years ago, and you can trust me that one is all I will ever need.  Her name is Heide, she's a redhead Scorpio like me, and every time she beams in my direction I hear angels sing.

So, um, what was I talking about?  Oh, right--a model.  My model got me a model for Christmas.  Of the HMS Titanic.  The model was of the Titanic, that is.  Oh, never mind.

Now, Heide is phenomenally good at the Christmas game.  She complains every year that I never give "tells" for what I want to receive for the holidays, and she's right.  I don't.  I really, truth be told, don't want anything for the holidays.  I have a hate-love-hate relationship with that time of year, in fact; I hate the commercialism, love the giving, and hate the receiving.

What I need during the year, I buy, either right away or by saving up for it.  What I don't need--well, if I don't need it, why should I get it?

Still, despite (or perhaps because of) my grouchiness, my lovely bride always finds special things that bring a smile to my face.  Like the model of the Titanic.  See, she started working at Michael's this year.  She's awfully good at what she does, but one thing she's not so good at is stopping on time.  That's a good thing for the store, of course; usually when it's time for her to quit she's in the middle of a conversation with a customer.

Occasionally I'll meet her at work at the end of her shift, and normally she won't be quite ready to leave yet, and so I'll wander the store.  Somehow my wanderings always take me back to the models section, where I stare for a while at the various cars, planes, and ships that can all be re-constructed in one-to-various-numbers scale.  It's a whole aisle of promises shrink-wrapped in boxes.

I've been known to rearrange the models so they're shelved properly over the correct UPC tags, and once I tried to organize the mess of a model paint rack they have.  It was no use, though; every row of paints was a little rainbow all by itself, and there was no way to effectively fix it without taking every vial out and starting over.  Luckily, Heide got done way too soon for me to get started on that project.  Plus, sometime between my youth and my current youthful-ish age they started using itty bitty letters on the paint labels.  I used to be able to read the names of the colors, but for this task I had to download a magnifying glass app onto my cell phone.

Speaking of my model-making youthful self, he used to love putting models together.  It started early on when somebody gave me one of those Snap-Tite models (the ones that don't require any cement).  Seems like it was a VW Beetle, if I recall correctly.  I made a few more cars without cement and then promoted myself to the models that had to be glued together.  At one point my little air force included an SBD Dauntless, a Messerschmitt, a Zero, a P-51 Mustang, a B-17, and my favorite (thanks to the TV show about Black Sheep), a Corsair.  A slightly smaller navy consisted of a battleship, an aircraft carrier, and a PT boat.  That, plus a lot of boyhood dreams, in both cases. 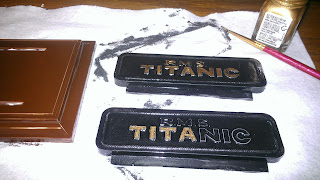 I didn't make models for the artistic pursuit, though.  I rarely used paint, mostly because we couldn't afford much paint when I was growing up but also because I didn't see the point, and I often only used enough of the decals to make the model identifiable.  It wasn't important, really.  What I got out of the model construction was, rather than any sort of visual fulfillment, instead a starting point for mental fulfillment.

Times were--well, different--then.  Not better, per se, nor worse, but quite different.  Nowadays I can hop onto my computer or my "smart" phone, head out into the great wild Internet, and look up whatever I want to know about, say, the SBD Dauntless.  The Dauntless, incidentally, rocked as a warplane--it played a major part in the U.S. victory in the Battle of Midway, a fact that I would've had no reason to uncover had I not investigated the plane while building the model.  There were, after all, much "sexier" planes in action during WWII, like the Zero and the Mustang that you always see going at each other in the old war movies.  But the Dauntless?  It sure earned its keep.

But like I said, it was different back then.  Our Internet was a library, and I spent a lot of time in ours.  Of course I went looking for novels, too, but much of what I checked out were military history books.  Over time I learned all sorts of things about all sorts of things, and that ended up being the prompt for talking to my uncle about the military academy, which in turn was what led me to West Point, which in turn shaped a lot about who and what I am today.

So here I am, roughly three decades older, a little wiser, and far less able to read small print or see small details, building a model of the Titanic.  It's pretty cool, that.  The smell of the paint and the cement brings back memories, to be certain.  But it's a different enterprise than it used to be.  For one thing, there's not a lot I don't already know about the story of that ship.  I learned about it in history class, and then, like many of you, I watched the movie.  A few times, and each time I've watched it, I've become angrier that DiCaprio's character didn't realize there was enough room on that damn plank for both of them.


Creating a model doesn't feel creative, though.  I know, I know--saying that creating a model isn't creative is wrong by definition.  It's just that it's not creative like writing is creative.  In writing you have a few rules--don't begin a sentence with a conjunction, or end it with a preposition, for instance--plus a whole lot of different words to choose from to create an idea, a mental image, a feeling.

And of course you can break the rules, if that's where your mind is at.

Model-building is a different activity, though.  In this case I'm intending to complete the model as a potential, eventual, display piece.  That means that instead of creating something that gives the idea of, say, a WWII battleship as I used to do, I have to follow the paint and glue instructions precisely to create a near-exact replica of the Titanic. I have to trim the plastic nubs off before I paint.  I have to paint before I glue.  I have to use the knife to chip away the mistakes in the paint.  I have to--you see the difference?

I'm not saying the model was a bad idea.  It's actually quite relaxing to sit down and work at it.  The activity has also provided a focal point, as I've discussed here, for rumination on the nature of the act of creation.

And now, lest I awaken tomorrow to an angry mob of Exact-o yielding modelers, let me add that I mean no disrespect for the act of creating models or for those who revel in that activity.  I have a good friend who is hand-crafting a fairly large scale replica of the Queen Mary, and it's stunning to see the pictures of his work in progress.  A well-crafted model is both a joy to look at and a trigger for all sorts of adventures of the imagination.

Nope, nothing wrong with building models. 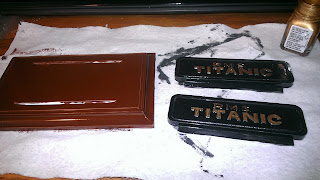 I'm just not sure whether I'll do it again.