Yay, NaNoWriMo is almost over!

Yes, I know that sounded redundant, but those of you who've done this extreme writing sport will get the difference.

And nope, I'm probably not going to win NaNo this year.

That, or I could cheat.  See, I used to teach software tricks for a living.  Back when it was Excel 5, I could show you how to get into the flight simulator.  Or, was it a maze?  I can't recall any more, and any copies of that software have long since been relegated to the trash heap.  But yeah, I used to know all the tricks, and even today I know most of them.

Microsoft Word has something ready-made for the NaNo'er who wants to win no matter what.  It's the randomizer function.  Back in the old days, it used to give you x number of "The quick brown fox jumps over..." sentences in y number of paragraphs, which generates a crapton of words in mere moments.  Later they changed it to create a bunch of Latin wordsmut, but these days it's just boring Help tutorial words.  It's still x number of sentences in y number of paragraphs, though, and the command looks like this:

G'head, try it.  Open a blank document and type it in there, only replacing x and y with numbers.  Turns out I need an x of 25 and a y of 30 to finish my NaNoNovel right now.  In fact, with an x of 100 and a y of 100, I can get over 200K words, composed in about 30 seconds.  Woo hoo!  A whole novel, written in 14 keystrokes (fifteen, technically, since we should count the pressing of the Enter key after).

How's that for automation, eh?

Only, it's not a story.  It's just words.  They're not fun to read.  There's really no reason to even waste the bits on my computer, much less pages on a printer, on drivel like that.  So yeah, just--.

I'm simply not gonna do it.

That's not to say my story isn't worth finishing, mind you.  It's a pretty awesome story, with a pretty awesome protagonist who's going through some pretty horrible stuff right now as I write one of the pivotal chapters.  I'm really enjoying writing this, to tell the truth.

The thing is, there's plenty I can blame my not winning NaNoWriMo on.  Most of it is external, too.  But you know what?  The only person who really cares whether I win NaNo or not is me, anyway.  Those who read my books don't care; they just (generally) want me to get more out there to read as quickly as possible.  Which is, I have to add real quickly, part of why I stopped blogging so much--I've been focusing on getting drafts done.

But this manuscript takes some effort, and some research, and some harsh emotional trauma, to finish.  I was in tears a little earlier, in fact, writing about--well, no plot spoilers here.  Later, when you read the book, you'll know it when you see it.

Ah, well.  You're really going to like this story, anyway.

- TOSK
Posted by The Other Stephen King at 9:42 PM No comments:

Most of you reading this know that I've been pretty proud of the learning curve I've beaten down in regards to making my own covers for the books.  What started as a pretty pitiful attempt has, I think, gotten better and better, to the point where the cover for Prophecy had some people oohing and ahhing at RavenCon.  And so, I was happy.

Prophecy has been well reviewed, too--three of the four reviews to date come from the pros, bloggers who just review books.  4.5 bits of happiness out of 5 ain't bad, then.

So why, then, wasn't it selling?

One of the things I remember learning from my marketing class in the MBA program was that if stuff isn't working--well, change it.  Do something.  So I started looking, and kept hanging back on where one of the reviewers had called my cover "confusing."

Huh?  Confusing?  Hey, I didn't count, but I'm pretty sure I spent well over 100 hours on it.  I'm not confused.  Still, I wondered what that could mean, so I went to my friends on Facebook for their wisdom, and learned that the reviewer was right.  The cover was confusing.  My daughter, beautiful artist that she is, focuses on anime style, and so the cover suggested an anime type of story rather than the coming-of-age story set in a mystical land of elves that it is.

So I redesigned it quickly, working with just the graphic of an object that is central to the story, and it still didn't take off.

Enter my friend, Renee Barratt, of TheCoverCounts.com.  Once I'd finally admitted that I couldn't make a

cover good enough to wrap around the awesome story inside the book, I asked her for help.  She stepped up in a big way, I think, and I'm excited to brag that today the new cover stands proudly on the "shelf" of Amazon.com, looking for you to purchase it!

Click on the link below the cover image to go see it.  Oh, and as a special thankfulness kinda thing, it being that week and all, I'm lowering the price to just $0.99--less than the cost of a soda.  But you have to be quick, as Amazon will only let me do that for a short period of time. 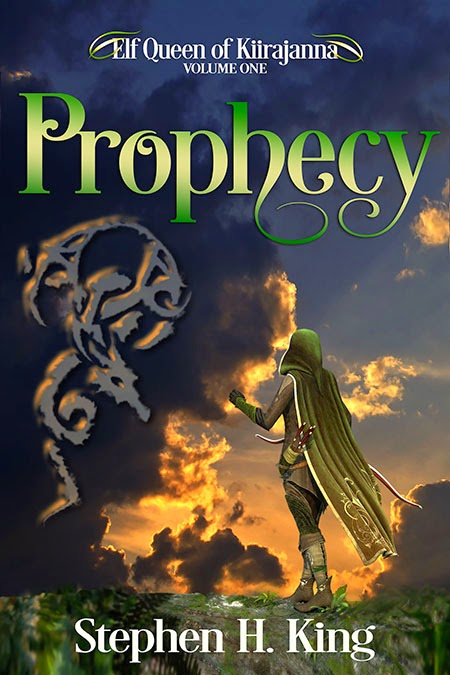 Get the book at Amazon.com

As I sit ready for an explosion of Trick-or-Treaters to come by, and also checking regularly to see my classmates' pictures on Facebook as they all (but me) enjoy the 25th reunion of The West Point Class of 1989, I can't help but think on past and future and present and plotting and--well, stuff.

See, the reason I'm not there is that I haven't yet found another job after my position was eliminated last spring.  I've come awfully close.  I've turned down a couple that weren't good fits.  I've taken one, briefly, that I should'a turned down.  I have things working--irons in the fire, so to speak--and I'm thinking my situation is about to change. It just didn't change in time to make the reunion.

Through the (seemingly) countless job interviews, though, it's been interesting how many times I've been asked questions beginning with "Why did you...."  Why did I leave Alaska?  Why did I leave Biloxi after only a year?  Why did I go to Richmond?  Why did I approach a retention problem the way I did?  Why would a college think that laying off an Academic Dean was a good idea?

I have to come up with an answer that is truthful while still being positive and upbeat and professional.  I can't, in other words, say what I'd like to say sometimes: "Well, I made what was, in retrospect, a dumb-ass move."

Actually, I can.  I did, in fact, once when I was feeling overly tired.  Not in those specific words, but it was about that level of humph.  And, as you can imagine, it went over like an audible expulsion of human gaseous waste during a religious ceremony.  *sigh*

But it happens, and it happens to everybody.  We all do stuff--in our personal lives as well as our professional lives--that, later on, would be rather tough to explain in a positive, professional manner in a job interview.   Right?

I've said other dumb things, too.  I nearly had one position; I'd already interviewed with a couple of recruiters, several executives, and others, and was on my very last interview, talking to the guy who was going to be my future boss.  Only, I had an absolutely craptastical morning, and wasn't at my top game, and (insert any other excuse you'll grace me with here), and he asked me what I did to relieve stress.  Now, I could've truthfully answered all sorts of ways.  I take my family on walks in the park.  I listen to music.  I play computer games.  I write.  And I actually did say: "Well, I write."  That wasn't the most targeted response, since the guy I was talking to was more of an athletic sort, but it would've been fine if I hadn't added, "I like to write so that I can kill people."

The silence that ensued was absolutely chilling.

Now, wait a sec--this is something we writers joke about all the time.  Somebody ticks us off, they're going to get killed off in our next writing session.  You just have to expect that, if you do something to make a writer angry.  You won't feel any effects, of course; it's pure stress relief for the fiction writer.  After all, it is, in fact, only fiction.

That said, writers shouldn't ever talk about that outside of writing circles.  Especially not on a job interview, where the guy at the other end of the phone is immediately going to put you in the bin with Freddy Krueger.  Bad, bad, bad TOSK....

No, I didn't get that job; it was filled by "another candidate."  Probably one who didn't admit to writing for the purpose of killing people, I'd say.  Life is like that sometimes, right?

So what does this have to do with plotting?  Well, see, I've always had this problem.  I'm writing along, and my main character really needs to do something stupid to advance the plot line, and I don't want to do it.  It's stupid, after all.  Who does stupid stuff?  Who blurts stupid stuff out at the wrong time?

I do it all the time.

Why, then, wouldn't main characters behave just as stupidly as I have on my worst days?

- TOSK
Posted by The Other Stephen King at 12:31 AM No comments: