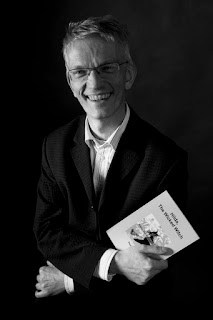 INTERVIEW WITH AUTHOR     Paul Kater
Today, for a special treat, I’m interviewing fellow Alexandria Publishing Group author Paul Kater.  His latest work, "Hilda - Magic on the Rocks" is a humorous fantasy book and will be released on January 12th of this year.

Please tell us a little bit about your book.
This is going to be the tenth part of the Hilda the Wicked Witch series. In this book, Hilda and her partner William are called upon as the magical people in fairyland (where they live) start killing each other without a sensible reason. As they progress the search to the reason of this, they assemble quite a large group of magicals around them with which they are going to get to the bottom of this, even when that's covered in a lot of ice and snow.

What is the book’s genre?
I call humorous fantasy. It's definitely fantasy, but Hilda inspires me to throw in a lot of fun, jokes and wordplay.

Is this the only genre in which you write?
No, I also write science fiction (real and the steampunk variety). In the same genre as Hilda (which is a series for adults despite the witch-theme) I have also written a children's book called Charisma the Young Witch, and I once unleashed a humorous book which makes fun of just about any religion.

What is it about this or these genre(s) that interests you?
Fantasy is versatile. You can do a lot of things in a fantasy story, and the challenge is to keep it 'credible' in a way. Having an invincible super-someone is hardly fun, they need their weaknesses and flaws and quirks, so a reader can relate to the main character.
Science fiction is fascinating to me. What will happen in the future? What species will mankind discover? Will there be a mankind to go out exploring?

How did you come up with this latest plot?
The idea for "Magic on the Rocks" had already come as I was writing Hilda's 9th adventure. Somewhere in that book I wrote and deleted a chapter about magicians trying to kill each other, and somehow that idea took hold in my mind. At that point there was a layer of snow over everything outside near my house, so I thought it would be fun to put that in too.

What is your writing routine like?
Since I'm not a full-time writer (I have a regular job, bills need to be paid) I write whenever I feel like it and have time for it. Mostly that means during lunch breaks and in the evenings and weekends, if nothing else comes up.
What is the most rewarding thing about having finished this latest book?
That the wait for Hilda's fans for "more" is almost over. :-)

What’s next in the writing queue?
At this moment I have already started Hilda 11 (the idea for that came from the end of Hilda 10), and I am doing an experiment in writing a story in two languages at the same time. It's scifi about a man who literally gets dragged into an adventure on another planet. BOOK BLURB
Book 10 of the series around Hilda the Wicked Witch. Hilda and William receive a visitor with a peculiar message. Things in the land of the magicals are going very wrong as wizards and witches start to have problems. One thing leads to another, and through all of this the magical heroes are facing snow and ice, which doesn't make things much easier. Fortunately they don't have to face these challenges alone.

How can we buy your book?
It will be available in all Amazon stores, through Smashwords.com and its affiliates like Barnes&Nobel, and I am working on getting the paperback version done on Lulu.com. More details and exact locations will appear on my website (www.paulkater.com) as soon as they are available.