To Poach An Egg

Brief, one-day break from the Al-Can story; this one hit me yesterday as particularly deep and--well, um, deep.  Hope you enjoy!  If not, hang on till tomorrow, when the Alaska Highway saga returns.

There's something about a perfectly poached egg.  I noticed it yesterday while preparing some for breakfast, and when I posted it to Facebook I got the responses I kind of expected: "huh?" and "isn't it kind of like watching paint dry?"

Answer: not if you really watch it. 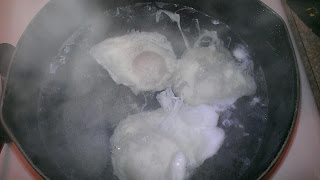 Now, think about it.  When you poach an egg, you take an orb of sliminess and bravely crack it open, and then you gently allow its contents to slide down into the bubbling-hot water.  Then, you do the hardest thing there is for a human being to accomplish.  Specifically, you do absolutely nothing.  You set a timer, and then you watch.  At first you only see the yellow core, but slowly the white around it begins to take shape. Before long, what appear to be fluttering wings of white become a cushiony cloud supporting and then surrounding the golden yolk.

When time is up, you carefully dip a slotted spoon in and under the now-cooked egg and lift it out of the water, dropping it onto a surface where it can shed some of the water that fled the heat with it.

Then?  Well, then, you can put it on bread, cheesy grits, or anything else, and enjoy the flavor combinations.  If you've timed it right the yolk is still a little oozy, while the white is puffy and firm.

There are plenty of wrong ways to do it.  Chief among those is not allowing patience and time their due.  If you dip the spoon in too early you disturb the delicate white wings that are in the process of forming, and they very quickly dissipate into tiny tendrils of nothingness.  You can also, in the interest of faster poaching, get the water too hot.  It needs to be just barely bubbling, but it's easy to think that a rapid boil will cook the egg faster.  Problem is, too much bubble will do as much damage as your splashy spoon will in scattering the delicate work that the gentle heat is orchestrating in firming up the egg.

Or, if you wish, you can always follow bad advice.  For my first attempt at egg poaching I followed an online recipe that told me to get the water spinning rapidly around the pot first, then drop the egg into the central vortex that was formed.  I did this with the first egg, and pfoomph!  Centrifugal forces took over and stripped the white entirely away from the yolk, which left very little egg to be eaten. Now, I will assume that that process works for somebody; else why would they put it up online?  It didn't work at all for me, though; I had to find a different way to go about the same thing, but once I found it I nailed it.

There are also warnings out there that tell you not to attempt to poach more than one egg at a time, but I suggest the contrary to that.  In the picture above, in fact, you see I have three perfectly-poaching eggs going in the same pot at the same time, all three looking like little golden angels about to take flight.  You can have as many eggs going as you have horizontal real estate in the boiling water.  The key is in being gentle as you deposit the eggs into the water.

See, it's like writing, really (you knew I was going to bring it around to writing, didn't you?).  There are a lot of a lot of people out there who will tell you how you shouldn't have multiple works in progress, or that you should, or that you should write off the seat of your pants or from a detailed outline.  The trick to telling which advice is garbage is simple: it's all garbage.  Keep in mind that in poaching an egg the idea is simply to keep the white with the yolk until it's cooked, and you do whatever it takes to get there.  Similarly, keep in mind that in writing a story the idea is to keep the reader reading to the bottom of the page and then turning to the next, and you do whatever it takes to get there.

Also, enough can't be said about patience, patience, and more patience.  The story you're writing isn't the story you're going to publish.  If you're writing your first draft, you're looking at a raw yolk and slimy clear stuff.  It takes time for a story to gel together to be a blockbuster.  It just does; that's a fact of the creative process.  You can't hurry it, or else you get a yolky mess.

And now that I've wrung this metaphor for all I can get out of it, I bid you good day, and good eats....

- TOSK
Posted by The Other Stephen King at 4:55 PM