There's always been something incredibly exciting about crossing over the border from one country to another.  It's related to the act of leaving behind the customs, the laws, the society I've come to know and stepping into the unknown.  The great big wild world that's out there beyond.

It's pretty dang exciting even when it's just Canada.

No, now that wasn't meant as a dig at our northern brethren.  I like Canada quite a lot, even to the point of having considered moving to there at one time.  It's just that they're so much like us (or is it we're so much like them?) that it hardly feels all that alien to cross into their nation.  I mean, Germany was quite a transition; they don't speak English over there.  Well, truth as I came to know it be told, they really do speak English over there, at least for the most part, unless they're mad at something stupid you've done or said.  In England and Ireland they spoke a different flavor of English than I was used to, to be certain, and they drove on the entirely wrong side of the road.  Mexico was just flat scary because of all the stories I'd heard of the completely different attitudes and water sources there.  The Bahamas?  Well, they wanted to braid my wife's hair.  A lot.  So much so, it was scary.

But Canada?  That's more like North Minnesota, eh? I mean, how different can two countries be when we have sports teams on the same leagues and it's not soccer they're playing?

Regardless, crossing the border in a motor vehicle, even "just" the border with Canada, is still interesting and exciting, thanks to the unknown of what you might face going through the checkpoint, and even more so since 9/11.  That said, relax--I've made it through successfully twelve times now, and you can, too, if you follow some basic rules of thumb.

First, before you go, make sure you have a passport for each person in the vehicle, as I don't think a driver's license will suffice for either direction any longer (though they used to--I made my first five trips on driver's licenses alone).  Make sure you have sufficient cash on you that they believe you'll be able to make it back/through, and also make sure any pets you're bringing along are vaccinated against anything they need vaccinated against, and more importantly, that you can prove it.

On the cash thing--have cash (as much as they call for, minimum, according to the customs sites), but try not to use it much.  Most places up in Canada, even way up in the frozen north, take Visa and Mastercard, and you'll typically get the best exchange rates by using those systems or by going to a Canadian ATM.  You'll find plenty of ATMs across the south (of Canada), so you northbound Alaska Highway travelers are set for Canadian cash.  From the north, I don't recall seeing one before Haines Junction and again at Whitehorse, and then not again till Watson Lake.  Then again, the Yukon facilities operators tended to take American cash readily so it wasn't such a big deal.

Like I said before, though, nearly all vendors through Canada take Visa and Mastercard.

That's despite the fact that Canadian money is cool.  Their loonies and the $2 multi-metal coins are way cooler than U.S. dollar and two-dollar coins.  The Canadian paper money is nearly as cool; they use pretty colors, after all.

I suppose I really am easily amused, aren't I?

As far as the rest of getting through Customs goes--well, good luck.  Try to look respectable, but try not to look like you're trying to look respectable, because that will make them suspicious.  Answer the questions directly, honestly, and succinctly, as the border agents have a thousand people to talk to just like you and don't really care whether you're heading to Alaska to move there or just to see the walruses jumping.

Check both United States customs and Canadian customs sites just before you head out, because no matter what I say here, crap changes all the time, and the agent speaking to you doesn't want to hear "well, I heard this was okay on this blog I read."  Remember, my fellow United Statesians, when you first strike out for the Al-Can, you need to follow the rules according to Canadian customs.  When you get to the other end, you need to follow United States rules.  You might get away with blowing off one or the other, as I, um, "might" have once or twice.  Then again, you might not.

Oh, yeah, and check the hours of the crossing point you're using.  The Alaska border station is open 24 hours, as is the great big multi-lane one, the customs version of Walmart, coming down from Calgary into Montana.  The one near Vancouver is as well, but not all are, and you don't want to look like a dork sleeping in a border station parking lot overnight

Generally, it's a crap shoot who you're going to get and how you'll be treated.  I've heard plenty of horror stories, but I've never taken part in one.  (knocking on wood now)  Hey, the customs folks have a job to do, and they do it by inspecting a certain number of the people who make it through.  The less suspicious you act, the less likely you're going to be one of that certain number, but you never know when your number will be picked.  I know people whose car was confiscated at the border entering Alaska because a drug dog found "a few marijuana seeds" in it.  Granted, I know them well enough that I'm not sure I believe it was just a few seeds.  Regardless, if you've ever had, um, something like that in your car, you might want to vacuum it out before heading to customs.  You might also want to put an air freshener in it so that it doesn't reek when you open your window to talk to the agent.  You might also not want to greet him, "hey, dude, like what's up, man?"

But again, your mileage may vary.  My first time through the border I was pretty certain we weren't going to get through.  My truck plates were expired, for one thing, and we had nothing at all to prove that the dogs (two of 'em) in the cab-over camper were vaccinated against anything (hey, I was coming from Arizona, where it's fairly normal to vaccinate your dogs yourself).  That, and I didn't have the money to go take care of the discrepancies and get to Alaska--it was one or the other.  *sigh*

We pulled into the border station just before it closed.  The guy asked where we were going, and we told him.  He asked us other basic questions, and we answered them (the dogs, incidentally, just never happened to come up).  I saw him lean his head out the window and peer down the Jed Clampett contraption I was driving, and then he turned back to me, shot me a sideways grin, and waved the family through with a simple "yeah, good luck."

On the other side of the event spectrum, when I re-entered the United States at a smaller crossing in Montana this last time, it was right at the beginning of the season and I got a green guy, a raw recruit looking to make a difference in the world.  He asked me for my manifest--my maniwhat?  Commercial drivers need manifests; UHaul drivers only need to list the contents, unless of course a customs agent decides otherwise.  Luckily there was quite a line piling up behind me, so after he made me lift the end gate of the truck to see stuff piled from floor to ceiling all the way to the back he turned to look down the line of cars building up, turned back to me, and wished me safe travels.

Oh, and leave your Second Amendment paraphernalia at home.  You know what I'm talking about.  If you're going to Canada specifically to hunt there are rules regarding how to get your guns there, but otherwise Canadian authorities are a little more restrictive than U.S. folks are regarding what weaponry who can pack there.  And hey, it's their country. 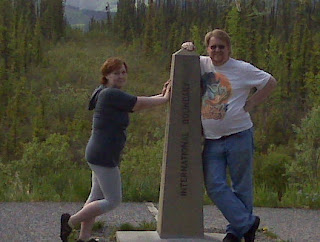 As for touristy crap at most of the crossings along the main United States - Canada border it's pretty nonexistent, but plan to spend a little bit of time at the Canada - Alaska border.  It really is pretty cool.  There's an obelisk erected right on it, and there's also a swath cut through the trees to the north and south along the actual border line.  It's a thrill to be able to stand in two different countries at once.  Or, as in the picture, to stand in one nation while your spouse is in another.  I know for a fact that it makes some guys very happy to have their spouses in a different country--just not this guy, with this spouse.

And so all that said, happy travels!

- TOSK
Posted by The Other Stephen King at 7:40 PM