I suppose there are more curious locations on the planet than the town of Haines Junction in the Yukon Territories, Canada, but I'm not sure where exactly they'd be. 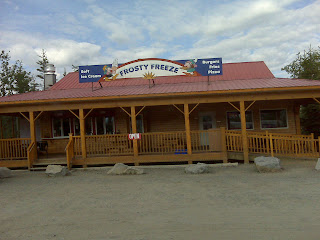 Why is the town of Haines Junction curious, you ask?  Besides, of course, having as a main food establishment a business called "Frosty Freeze" in the midst of the great white north (incidentally, we ate there this last trip and found it pretty good--the local mosquitoes dined en masse at the same time and seemed to enjoy it as well).

It's curious, first, because at Historic Milepost 1016, actual mile 985, it's the first, or last, actual Canadian settlement, as defined by having single-purpose businesses and buildings, that you'll come to on the Alaska Highway.  If you're coming north, as we did our first time, you probably have no idea this is the last place with a real grocery store that you'll see before you're well into Alaska.

On the other hand, if you're coming south, as we did our last time, by the time you've bounced and jiggled this far you'll probably be saying "holy crap, they have a grocery store."

Haines is as far as I know the closest settlement on mainland Alaska to the rest of the United States.  That is, you can drive to it from nearly anywhere in Alaska that is served by roads (though you do have to travel through Canada to get there due to the mountain ranges, admittedly).  It's also in the "inside passage"--an area protected from the vagarities of the ocean by the islands it passes through--which means the trip to Haines from the south was, and still is, a safer passage by sea than a trip straight to the Port of Anchorage.  Before the Alaska Marine Highway ferries offered trips to Whittier (made possible once they finally blasted the tunnel between Whittier and Anchorage), the ferry to/from Haines was the best sea-bound choice to get to/from Alaska. That made the Haines Highway, through Haines Junction, the best way to get there.

So all that being said, Haines Junction is a curious location not only in terms of where it connects to, but also in terms of the town itself.

Like I said, the town has a grocery store.  That store bears the honor of being one of the few places I've given business to on nearly every trip I've made (all except the last, and only then because I was in a hurry).  Not that it's particularly special as grocery stores go; it's actually rather small and expensive.  But it's--well, it's a grocery store.  By that point on the trip you always have something needing restocked; hence, the special tingly feeling you get inside when you see an actual grocery store on the Al-Can. 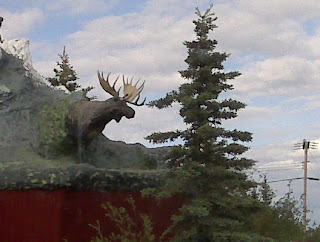 Also at the intersection of the Haines Highway and the Alaska Highway is a large sculpture that exemplifies various species of the local wildlife.  The photograph to the right is the moose on that sculpture, called the "Village Monument," or more sardonically "The Muffin."  It's a cool sculpture.

Next door to the grocery store is another curious place: the liquor store.  That, and the library.  Yes, both.  The liquor store and the library are in the same building in Haines Junction.  No, seriously.  It's like Canada's tribute to Ernest Hemingway and William Faulkner combined.  I know, it's really just a matter of both being governmental functions in Canada, and those functions in Haines Junction are awfully limited in number and scope and thus are reasonably housed in a single building.  I get that.

Still, it's funny as hell. 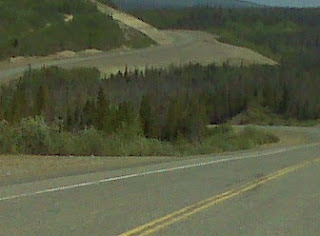 Haines Junction is also the first time in Canada that most Alaskans will see a real street sign, and that in itself is a beautiful thing.  You actually have to make a turn, if you're on the Al-Can.  Coming south, it's a hard left, while coming north it's a hard right.  I know, I know, turns aren't that big a deal, at least until you've spent hours just traveling down the same curved road without them.  At that point, turns are a big deal.  Whoop whoop!  Hoo yeah!

So yeah, Haines Junction is an awesome little town.

(Post Script:  In researching this post further, I learned that Madley's General Store, the quaint grocery store I rejoiced to see every trip, went out of business in 2008  Another business apparently took its place till 2011.  News reports claim that another establishment is opening in late spring, 2013, to take its place, though.  Boo yah!)
Posted by The Other Stephen King at 11:15 AM