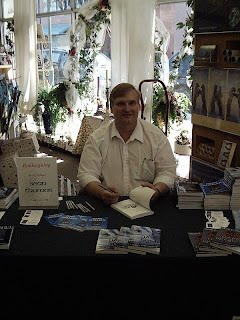 INTERVIEW WITH AUTHOR Sean E. Thomas
Today I’m interviewing Sean E. Thomas, a long-time friend of mine from Alaska.  He and I met through his son, Bob, who was one of my I.T. students.  At Bob's graduation, SE and I became good friends.  Sean's latest work, Deadly Rites, is a Mystery and was released in on November 1, 2012.

Please tell us a little bit about your book.  Deadly Rites is the ninth novel in the Alaska State Trooper Robert Sable Mysteries. In DR, Priests are being crucified on inverted crosses in Alaskan churches.  On the surface, it appears priests are killing priests.  As Sergeant Robert Sable starts his investigation, he finds a similar trend across the lower 48 states. It seems that Alaska now has another serial killer.  Sable must sort out the suspects and clues to find the killer.

What is the book’s genre?  Mystery.

Is this the only genre in which you write? Now, yes. In the past, I have written articles on Copy Machine Management, published in Association of Records Managers and Administrators International Quarterly circa 1992.

What is it about this genre that interests you?  It holds many avenues for new plots and ideas.  It allows me to use my extensive background in the military, chemistry, analysis and deductive reasoning.

How did you come up with this latest plot?  From the front pages of newspapers.  Some like Lost Legion and Dark Shaman came from my nightmares/myths and legends.  Roman Legions made it as far as China (Qin)—Why not Alaska?  Dark Shaman came from the myth that one could gain a shaman’s power by drinking from his skull.  Dark Gold came from the myth that an Army Quarter Master aircraft carrying tons of gold crashed on an Alaskan glacier.  Stalker and Silent Killer covered factious serial killers (similar to Ted Bundy and Robert Hansen).  And Alaska Dutchman is a story of a mine of myth and legend.  In June 2013, Frozen Treasure merges fiction with history on the Spanish exploration of Alaska.

What is your writing routine like?  Usually, I write every day, sometimes all day.

What is the most rewarding thing about having finished this latest book?  It feels great.  Yet, I can’t get really excited because the work isn’t over.  Then novel has to be edited, reworked and after it’s sent to the publisher, they make changes.  Then the galleys need to be edited.  But when the novel is in hard copy and in my hands, I feel pride.  I love to feel the cover, the paper and enjoy leafing through the pages. That pride is short lived.  The work has only begun—promoting the novel and working on the next one.

What’s next in the writing queue?  Blood on the Moon (tentative title/my eleventh novel).  It’s about murder/money and the Iditarod sled dog race.  Next, Priestess will be Wicca and murder.  Recently, I have had to set them aside.  I needed to revise/edit my first four novels for conversion to e-formats.  My current publisher is picking them up.  When I first started I had new author-itis—lots of descriptive prose and long dialog.  I’ve punched up the dialog and made the prose concise.  So far Dark Shaman and Dark Gold have been accepted.  Dark Project and Dark Project have been revised and are awaiting a final edit before going to my publisher.

BOOK BLURB
Deadly Rites (November 2012).  Priests are being crucified on inverted crosses in Alaskan churches.  On the surface, it appears priests are killing priests.  As Sergeant Robert Sable starts his investigation, he finds a similar trend across the lower 48 states. It seems that Alaska now has another serial killer.  Sable must sort out the suspects and clues to find the killer.
Alaskan Dutchman (September 2012). A prospector’s body is found near the railroad tracks south of Fairbanks.  At the miner’s cabin, Alaska State Trooper Sergeant Robert Sable finds two bodies slumped over a table in pools of blood.  While investigating the crime scene, he finds several hundred thousand dollars in gold nuggets hidden under the base of the prospector’s fireplace.  Rumors fly that the prospector had found the Dutchman, a mine of myth, legend and a curse.  Over the last hundred years, many men had died trying to find the mine.  Those who did find it ended up dead, and the mine would be lost again.  The killers close in on the mine’s location, and as Sable follows the clues, they lead him closer to the killers and mortal danger.
Stalker (May 2012).  More dangerous than Theodore Bundy and Robert Hansen combined, a serial killer calling himself Anubis stalks the cities and highways of Alaska. This killer leaves no fingerprints, fibers or DNA.  He hides behind numerous stolen identities.  Now, the stalker has murdered a Seattle police detective.  Alaska State Trooper Robert Sable and his team must find the killer before he strikes again.
Silent Killer (October 2011).  Alaska State Trooper Robert Sable investigates a serial killer who uses stealth and carbon monoxide to kill alumni from the Chugach High School class of 2000 and their families.  So far, all the deaths have been ruled accidental.  It appears the killer is exacting revenge for bullying and abuse in high school.  The killer leaves minimal evidence, only a tiny smiley face with the number 2000.  Since Sable’s wife is a 2000 graduate, she may be next on the killer’s list.  Sable and his team must catch the killer before he strikes again.
Lost Legion- (August 2011).  Pulled from his honeymoon, Alaska State Trooper Robert Sable investigates the murders of the governor’s brother and the brother’s friends.  Clutched in the dead men’s hands are gold coins imprinted with the likeness of Augustus Caesar.  As Sable follows the clues, he realizes a myth that Roman soldiers settled in Alaska more than 2,000 years ago may be true.  Closing in, he comes face to face with the architect of the murders, a village chieftain who is a descendent of the Romans.  The descendents have set into motion a plot to take over the halls of power in Washington, D.C.  Even the current Alaskan governor unknowingly is being used as a pawn to achieve this aim.  It is up to Sable to foil the plot and put the chief and his fellow conspirators behind bars.

AUTHOR BIO
A longtime Alaska resident with a Native American-Finnish heritage, Sean E. Thomas graduated in 1970 from Alaska Methodist University with a bachelor of arts in chemistry.  He attended graduate school at the University of Idaho for two years studying organic chemistry, then served eight years as an Army officer, working with missiles and laser weapon systems.  He later went into federal service, working in different endeavors, and retired in 2006.  He is married to his college sweetheart Doris and has one son Robert.  He published four novels between 2002 and 2003.  They are now being converted to electronic formats.  He had a five year break in writing because of congestive heart failure and ablation therapy to correct some of it.  After recovering, he started writing again.  His five newest novels were published fall 2011 through fall 2012.  A sixth new novel, Frozen Treasure, will be out in June 2013.  Other novels are in the works.  An avid boater, he has been a Coast Guard Auxiliary volunteer for more than 36 years, teaching boating safety and supporting search and rescue programs.  Member: Sisters in Crime (SinC), Pacific Northwest Writers Assoc., Alaska Professional Communicators, National Federation of Press Women (NFPW), Alaska 49 Writers, Association of Alaskan Writers and Alaska Writers Guild.

And now, some fun questions:
1)      Favorite author? Robert Parker. His novels are straight forward and no nonsense--noir.  I used to like Dean R. Koontz—his earlier works but then he started using lots of prose with little substance—he became too wordy.  Stephen King has a similar problem.
2)      Favorite character in a book you’ve read? Spenser and Jessie Stone.  These characters are thinking men.  They plan their traps and they use teams to back them up.  Yjey neve walk in to traps alone.
3)      Favorite vacation?  Hawaii.  When the temperatures are at 30 below zero is always great to get away from cabin fever, thaw out and enjoy the warm weather.  Also it means not wearing lots of clothes.
4)      Coffee or tea? Coffee.  I love coffee in all its forms.  I like to have a pot or two of coffee while I write.  I also like flavored creamers—coconut, cinnamon, and pumpkin spice.
5)      Favorite color?  Blue.  Though I like wearing all black like my son and Johnny Cash.
6)      Favorite dessert?  Bread Pudding.  My mother and grandmother made it and I guess I haven’t outgrown it.  Every time I go to Golden Corral after dinner, I head to the desert table for bread pudding.  There’s just something about the creamy vanilla and raisins.
Posted by The Other Stephen King at 11:04 PM