The car rolled gradually to a quiet stop.  Its driver opened the door and slipped out, closing the door gently, silently, as though his very presence disturbed the tranquil setting.  His measured footfalls padded away onto the grass.

Inside the car, a girl sat and watched her father's ritual.  She allowed an exasperated sigh to escape.

"Now, Jenny," her mother chided, "relax.  We'll be at Uncle Don's soon enough, and you'll get all the time to play that you want.  Let your father have his time now."

Jenny shook her head.  As she and her cousins neared their teens, they were proud to be growing out of 'play time'; now, they enjoyed sitting and talking like adults.  Still, sitting and talking with her cousins was much better than sitting in a car with its radio muted.  "Fine.  But what is he doing?  Why does he have to do it every year?"

"I think you should go ask him.  He can tell you better than I can."

Jenny jumped out of the back seat and mimicked her father's solemn walk between the white marble stones that stood stretched in rigid formation across the grassy field.  As she approached the spot where he was silently planted in a position of attention, his arm snaked out, wrapping across her shoulders and pulling her in to stand close beside him.

"Dad," Jenny started, expecting her father to shush her too-loud voice as it cut through the quiet sensation of peace that blanketed the graveyard.  He didn't, though, so she continued, "Mom told me to ask you why you stop here every year."

The man, the grey hair dappling his temples his only sign of age, nodded as though he'd been expecting the question.  Inclining his head toward the tombstones to their front, he said, "For them."

"Yeah, I know that, Dad.  Every year the principal comes over the PA system on Friday and tells us this weekend we need to honor our fallen veterans.  You were one, weren't you?"  He almost never talked about it, but she'd seen the pictures in his office at home.

He chuckled soundlessly.  "Not a fallen veteran, Jenny.  I'm one of the lucky ones; I came home to your mom and to you."

"Did you know any of these guys?" 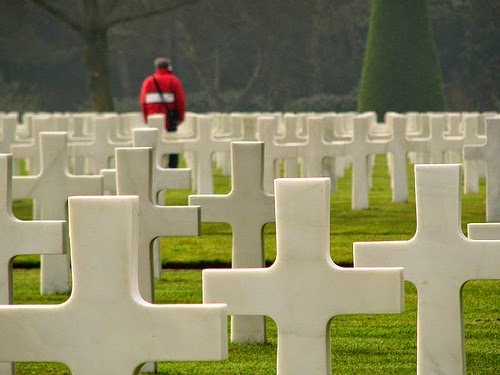 Jenny saw her father nod, but then silence stretched between them to the point that she suspected she wouldn't get an answer.  Finally, though, he inhaled slowly and then said, "Yeah.  Paul," he indicated the stone directly in front of them, causing Jenny to focus in on the details scribed on that one stone out of the thousands that surrounded them as he continued, "was a great guy.  He always smiled, no matter what.  CO said we had to spend our Friday evening cleaning our weapons, and Paul would be the first to get down to it.  'Quicker we get to it, quicker we get done,' he'd say through a smile.  John," he indicated a stone a few spaces down and Jenny moved to read that one as he continued, "tall redhead kid that was always in trouble.  Kid could do some pushups, though.  He had plenty of practice.  No sooner did we get set up in tent city than he hauled out some of those little bottles of whiskey--contraband, they were.  Could've gotten us all stoned."  This time her father's chuckle could be heard.

"How did they die?" she asked as she came back over to be folded under his arm.

Her father pulled her in closer to his shoulder.  He stood and spoke, often using his free hand to help describe things, longer to her of his military time than he'd ever taken the time to before.  He told her of the frustration they'd felt seeing their friends lying, dying, from a roadside bomb that gave them no one to shoot back at.  He told of moving through cities, protecting local groups, and then roaring to rip an entire building down to its very foundation after a sniper had fired from its roof.

He also told of good times, though, of training, of living, of laughing with the other men.  The camaraderie he described, that Jenny could hear in his voice, was deep and lifelong.

Finally the storytelling session wound down to a close.  Wiping the cascade of tears from his face, he turned back toward the idling car. "Guess we ought to be getting to that cookout, right?" he asked.

"The soldier above all others prays for peace, for it is the soldier who must suffer and bear the deepest wounds and scars of war." - General Douglas MacArthur

It's very hard to describe the feelings I get as a veteran every Memorial Day when my heart and mind recall people I served alongside who gave their lives in defense of this nation.  This weekend, my heart goes out to all of them and to their loved ones.

Have a wonderful Memorial Day, all.

photo credit: Storm Crypt via photopin (cc)
Posted by The Other Stephen King at 2:41 PM