I Don't Get It

What’s this mysterious it?  It’s hard to encapsulate into a word or two, so lemme ‘splain a little bit.

There are quite a few places to stay when you come to Arkansas to spend a wonderful day or more not-finding diamonds at the Crater of Diamonds State Park.  Some aren’t open in November; most, though, are.  As you’ve probably already guessed, also, some are quite cheap, some are very expensive, and others are right in the middle.

Which should I pick?

I narrowed it down quickly by asserting that we were bringing our puppies along with us.  One’s an old, old guy who we’re scared to leave by himself for a while, and the other is a young persnickety little girl who we’re also scared to leave by herself for a while, for an entirely different reason.  We don’t like to leave either of them in kennels, and generally having friends stop by to make sure they’re okay isn’t enough social contact for them, so we’re kind of stuck traveling with the little boogers.

That narrowed it way down.  The park’s web site has a long list of accommodation options, but specifying “pet friendly” reduces it to just a handful.  Then there's other qualities that are important to me, like "not outrageously expensive" and "not skeezy."  Having a way to prepare basic meals is nice, too, because that means we spend less of our hard-earned money on going out to eat -- or, at least, that we have the option of doing that, or not.

It ended up coming down to a choice of two, and ultimately I made the selection based on online reviews.  The place we were in had sterling reviews, and lots of ‘em, while the other place had some negative comments -- like "mold" and general lack of customer service.  Yeah, no, thanks. 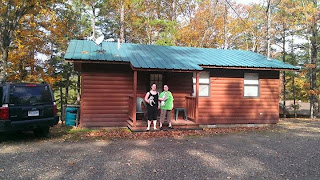 Swaha Cabins and Marina it was, then, and I’m glad now that we chose it.  It was a nealry perfect place, with a beautiful setting and exquisitely-maintained cabins.  The bed was a little hard for my preference, but I do recognize that as a personal taste thing.  The full kitchen only lacked a dishwasher, at least until our daughter stepped into it.

(don't tell her I said that)

They also have a book on the table for guests to leave remembrances about their stays.  I read it and – well, that leads to what it is that I don’t get.

Nearly every entry into the journal is a complaint.  This place, this idyllic set of cabins set up above a lake in the foothills of the Arkansas mountains, this abundantly well-reviewed (online, anyway) business, got panned in the actual reviews there on site.

For what sin, you ask?

No, I’m not kidding.  There’s no WiFi there.  There’s also extremely spotty cell phone coverage.  I received a butt-call from my stepson our last night, followed by a text apologizing for it, and I couldn’t return the call because of lack of signal.  It would be okay for a second, and then not, for a long while.

When I first arrived I took some beautiful photos of the cabin and – well, you know, I kinda bragged a little.  I posted them up to Facebook.  Or, rather, I tried to post them up to Facebook.  The first two posted okay, and then the next four just sat in the queue trying to get through the then-closed digital airwaves.  I don’t know if you’ve ever done that with a smart phone, but you shouldn’t, because I let it spin and, over the course of about half an hour, I watched my battery strength indicator go from green to yellow to red.

I actually had to turn it off and plug it in. 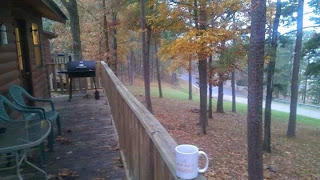 It was – liberating.  Hell, it was quite nearly orgasmic.

Look at the picture of the back porch.  I ask you this: would it be improved in the slightest by a WiFi antenna?

I wrote this sitting right there, in fact, right in that first visible green chair, typing on a laptop that was actually sitting in my lap, sipping coffee out of a real, non-styrofoam cup, and the only part of the great big world I was connected to was the one that contains wind and birds and crickets.

And I loved it.

- TOSK
Posted by The Other Stephen King at 9:45 AM