I've had two very different experiences in Edmonton, both quite pleasant, each a decade apart.

The first time I stopped and enjoyed a respite in Alberta's capital city, we weren't in a hurry at all.  We'd suffered all the worst the journey could throw at us, or at least so we thought, and all we really had to do at that point was make it down to Colorado by the time my grad school started.  This was in early July, so we had plenty of time.

We'd also been looking forward to the stay.  My wife at the time had met a wonderful First Nations woman at an Anchorage drumming event, and they'd corresponded often.  Thus, we arrived to find a small circle of Canadian friends to show us around.

Show us around, they did.  We went as a group to experience the world's largest shopping mall, and it was a true experience.  They have two roller coasters, an ice rink, an old Spanish galleon, a water park, an indoor putt-putt course, and, um, what else?  Oh, right--lots and lots of stores.  Oh, and a strip of bars that they jokingly refer to as "Bourbon Street."

At least, I think it's meant as a joke.  I've been to Bourbon Street in New Orleans and the only real similarity is that both have a lot of places to drink.  Then again, after you've been on the Al-Can for a while, the drinking part is likely to be the greatest part of what you're interested in, so maybe it's apropos after all.

In addition to having a great time at the mall, we also enjoyed watching movies--yes! they have movies in Canada!--as well as an evening of bingo.  Only, the place they took us didn't play bingo quite like we did in Anchorage.  Instead, they played bingo in the same attitude with which they piloted their cars--fast and furious.  We were used to sitting there with four or five cards, going "Okay, B15--not on that card, here it is on this card, not on this card, not on that card...."  A couple of minutes later, then, the caller would yell another spot.


They looked at us kind of funny when we asked about playing more than one card at a time, and we quickly found out why.  You've got just enough time to find B15 and mark it before the next spot is being called out.  And then the next.  And then the next.  It's bingo on crack.  I felt like I was playing Whack-A-Mole with the dauber.

It was cool to learn that my Blockbuster card from Anchorage would work in Edmonton.  Granted, that's a relic these days, but at the time we didn't have a big Red Box to slide a credit card into and then catch the movie it spits out at us.  The card had to work, or else, and the store manager was as surprised as I was that it did.  Hell, my Blockbuster card from Anchorage didn't even work in every store in Anchorage.

After a few enjoyable days in Edmonton, we continued our journey with two new tires on the cargo trailer.

The next trip was focused entirely on the mall; no power bingo for us.  I'd been telling the family about the great big mall up there in Edmonton and they were really excited to get there.

Funny thing is, you wouldn't expect the biggest mall in the world to be difficult to find, but it was.  The first trip I'd been driven there by friends.  Also, there some construction along the way that my GPS didn't know anything about, and it didn't help that it's actually called the West Edmonton Mall.  Bertha (my GPS) didn't know which mall I was talking about until I added the "West" part, and saucy disembodied voice that she is, she didn't seem to give a crap which mall is biggest. 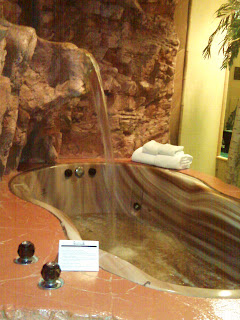 We finally arrived, and I was ecstatic to find overnight parking in the hotel's section of the mall lot despite the fact that we were in a huge truck towing another truck.  We checked into the Fantasyland Hotel with almost giddy elation, selecting as we did to stay in the Polynesian themed room.  See, the themes rooms cost a bit more, but they have killer amenities.  The Polynesian room, in fact, had just what we were looking for: a deep jetted tub.  We hadn't been in the room for five minutes before we were filling the tub up with hot water.  Everybody put on our bathing suits (hey, the teenage girl was with us, and--well, you know) and we shared a heavenly group soak that was as relaxing as it was cleansing.

Ahhhh....  There's just no feeling in the world like going from as grimy as we were to a hot jacuzzi tub. 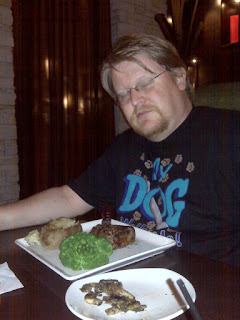 Then we went to dinner.  By the time we were done with our soak many of the mall's restaurants were closed, but we still managed to suffer through a steak or two.  You can see in the picture that I enjoyed a well-seasoned and well-cooked chunk of red meat, when I managed to keep my eyes open, anyway.  Sated, we slogged back to our room and crashed.

The next day we really enjoyed the mall.  The water park there is incredible, as are many other parts.  My cell phone's camera was acting up, though, so most of the pictures I took weren't worth saving.  Ah, well--you'll have to just believe me.

We slept well again the next night, and then, so emboldened, we turned the nose of the UHaul due south and continued the journey.

- TOSK
Posted by The Other Stephen King at 8:53 AM