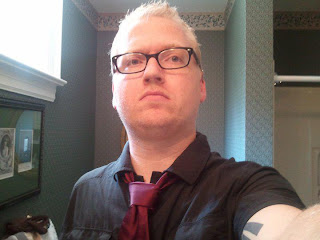 INTERVIEW WITH AUTHOR jonny Lupsha
Today you're in for a treat.  While I've never met a writer who wasn't interesting, some are incredibly so.  Today I’m interviewing jonny Lupsha, a member of the second group and fellow James River Writer.  His work, The Broken Paragon, is an essay anthology and is released quarterly.  The last issue was released on December 12, and the next issue will be released on March 5, with a release party at Capital Ale House, Downtown, the beer lover's beer hall.

Please tell us a little bit about your anthology.
The Broken Paragon is a collection of scholarly essays published digitally, and quarterly, by my publishing company, A Carrier of Fire.  It focuses mainly on video games.  It includes essays written by myself for now, though I’m poaching some other contributors for future issues.  The essays are usually between 1,500 and 5,000 words apiece. 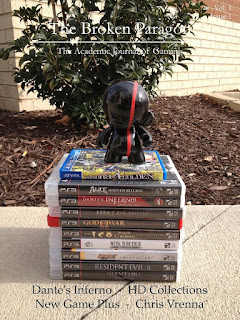 What is the book’s genre?
The Broken Paragon is a series of academic essays.  As such, The Broken Paragon contains four to six analytical essays per issue.  These essays discuss in detail – and analyze with great scrutiny – the most influential and groundbreaking artistry in the medium.

Is this the only genre in which you write?
I only write non-fiction, which would certainly encompass academia, but I usually write narrative or creative non-fiction, which is more akin to anecdotes or short stories than articles with full bibliographies etc.  I admire and revere fiction, but it seems like such a big blank canvas that it terrifies me.  With non-fiction I have enough in my head to start with that it seems more digestable.

What is it about these genres that interests you?
Gaming now rivals American film in terms of the industry’s size, titles are being released that are based on Pulitzer-winning novels and three of the last seven Academy Awards for Best Original Score were granted to composers who have also written music for games.  Games and gamers have grown up; The Broken Paragon is just an extension of that.  Every new media without exception is run through the wringer by critics who pan it as “low-brow entertainment.”  From opera to photography, from film to recorded music, all have been hazed thoroughly before gaining any widespread respect.  We just want to help gaming along its way, where it deserves it.  In terms of what interests me about non-fiction in general, there’s this line in the David Lynch movie Lost Highway where the main character, played by Bill Pullman, says he doesn’t like video cameras.  “I like to remember things my own way – not necessarily how they happened.”  That line has haunted me for 15 years, and inspired me to put my perspective into everything in life.

How did you come up with this latest plot?
My second novel, Penny Cavalier, is a year-long research project into “Real-Life Superheroes” – people in real life who, in their spare time, form alter egos and go out to high-crime areas of their towns and patrol, looking for muggers and rapists and drug dealers to stop by any means necessary, or looking for the homeless and those in need to help supply them with the things we take for granted.  It’s as likely that one of these folks will carry a baton and smoke bombs as it is that they’ll carry dry blankets and canned goods.  After writing Penny Cavalier, I started to get involved with James River Writers and found myself really wanting to give these working-class heroes the benefit of the doubt when explaining it to other writers.  That led to me asking myself what other things I know pretty well that are more worth intelligent discussion than their mass exposure may indicate.  I toyed with heavy metal but eventually settled on video games.  Given that I had a lot of practice writing essays in college, the rest just fell into place.

What is your writing routine like?
For my other work, I’ll generally think of a five- to ten-minute story from my life that I’d like to tell at a party and I’ll sit down with it for a few thousand words, pulling details and events from memory to help round out the overall story.  For The Broken Paragon, I try to think of a tidbit of information or trivia about a game that I could’ve used to impress my wife if we’d just met and follow a similar process.  I grab some back issues of gaming magazines from around the house, open Word in one window on my laptop, Google Chrome in the other, put on headphones with a couple hours of music on a playlist and get to researching.  I don’t outline as much as I should; I’m usually a few pages into an essay before I start copy-pasting sentences and paragraphs into a cohesive, flowing sequence.  Eventually, from chaos comes order and it gets into a working progression I can send in for peer review.  When those come back, I touch up the things I may have missed the first time and save them in a folder for publication.  Of course I’m also a stay-at-home father, so my typical night of writing starts at 10 p.m. after our daughter’s in bed, and ending around 2 a.m. so I can get up with her at 7:30 or 8 the next morning.

What is the most rewarding thing about having finished this latest book?
When I was finishing my first novel, 100,000 Years in Detention, I heard a lot of people say “Anyone can write one book; the trick is getting another out,” and as hard as it is to get that first book finished, that’s still true.  I was incredibly relieved when the ball was rolling on Penny Cavalier, and when I got its paperback proof in the mail I was ecstatic.  To anyone who likes my reading, I was no longer a “one-hit wonder,” and since they were very different projects, I was also not a “one-trick pony.”  On a smaller scale, the same is true for The Broken Paragon.  I had close to 20 essays planned for it before starting on the debut issue, and picked four that were easy to read.  When that was done, it was exciting to get it out, but since it was the only material I’d finished, I didn’t have any proof beyond promises to show that it was an ongoing series.  Now that I have the sophomore release finalized and ready for layout and publication, it’s a different story.  Issue #2 is bigger and more in-depth than the first, with a different focus and the confidence from Issue #1’s positive feedback fueling its fire.

What’s next in the writing queue?
Issue 3, of course!  I’m looking at starting it right on March 5 when Issue 2 launches.  Ideally I’d like to have the time to fit in some other work between now and then, but I’m not chomping at the bit with any non-gaming ideas at the moment so I’ll have to see if and how I can punch something up.

BOOK BLURB
The Broken Paragon is an anthology of essays on gaming.  This exploration and critique of the innovations and the industry itself is a quarterly, digital production from A Carrier of Fire.  The debut issue looked at artistic liberties in the adaptation of Dante’s Inferno, featured composer Chris Vrenna’s 3-D soundscapes in Doom 3 and more.  Issue 2, which is due March 5, focuses on the Silent Hill franchise.  Silent Hill is a global phenomenon using horror as a vehicle for sociopolitical commentary, 1930s French theater revival, innovative sound design using industrial foley effects and more.  Whether you’re a gamer or not, the fascinating and intriguing discussions in The Broken Paragon have something to offer any avid reader interested in pop culture and its roots in classic art and world history.  A Carrier of Fire is hosting a launch party for Issue 2 at the Capital Ale House Downtown at 6th and Main St. in Richmond on March 5 at 6 p.m.

AUTHOR BIO
jonny Lupsha was born and raised outside of Chicago, and has lived in Hawaii and Georgia.  jonny earned his BA in journalism from Valdosta State University in Valdosta, GA, and moved to Virginia shortly thereafter.  The owner of the independent publishing company A Carrier of Fire, jonny lives with his wife and daughter in the Richmond area.

How can we buy your book?
Paperback and Kindle versions of my novels are available by searching my name at Amazon.com; the digital versions of The Broken Paragon and my previous project, DisasterLand: Centralia are available at A Carrier of Fire’s website, ACarrierofFire.com – which also includes links to blogs and free samples of my material.  The Broken Paragon is a digital publication, and comes in a packet with DRM-free copies formatted for Word, PDF and Kindle.  Each issue is $1; an annual subscription is $4.

And now, some fun questions:


Posted by The Other Stephen King at 7:04 AM