TOSK says: I'm pleased to present Linna, a friend of mine and the lady who introduced me to Trestle Publishing. She and I write in similar genres; we're both fantasy authors but her books are written for the YA (young adult) audience while mine are meant for adults. The differences can be subtle in some respects; Linna does a good job describing the characterization which is one of the differences.

Linna Drehmel says: Hello, Stephen; thank you for having me on your blog.

My name is Linna Drehmel and I am an author of SciFi/Fantasy stories for young adults. I am also starting to venture into the world of YA gothic horror.

Of all the compliments that I have ever received on my stories I think the one that I hear the most is that I have really well developed characters. The angle I have when writing my characters is unique because I am writing in a way that will appeal to the teen demographic as well as a SciFi/Fantasy demographic.

There is an article in Writers Digest on the matter of young adult characters that I would like to address:

How do I write my young adult characters and make them strong without mothering them too much?

The answer to this question is a bit complicated for me, because one cannot approach my characters with the modern day culture and how we perceive teen agers.

Two really good examples that contrast the way I write my teens are also two very good authors that I admire: J.K. Rowling and Stephanie Meyer. They both have written successful young adult fantasy series, but their books take place during modern day earth. With cultures and traditions that most everyone is familiar with. Both of these talented ladies did a very good job of creating enduring as well as strong characters that were able to think on their own without parents holding their hand throughout the whole story. The plots and sub plots put them in situations where it was sink or swim with no parents around to bail them out. The reader gets swept up in the story with the characters. They are fantastic!

Now with this in mind let me tell you about how I approach my characterization.

In my HEART book series, my characters are not from earth; they have never been here and will never come here. I have created a completely new world for my characters. In order to do this I had to create a new culture. In this world no one has the right to choose anything about their lives. All is decided by the ‘God’ of this world called the HEART. Before a person is even born it is decided that who that child will marry, what they will do for a living, where they will live and how many children they will have. The HEART even decides on what the babies names will be. The protagonist in the first book of my series was given the name of Donna. It was decided by the HEART before she was born that she would marry a boy named Devon who was born around the same time she was. At the age of 18 these two will be married, and given the pre name of DRA. They will begin the jobs that they were trained in from the time they were children.

So you see at the age of 18 they are no longer kids, in this world they are adults. In fact you will see in the books that the pre name is symbolic of the person no longer being a child. Say for example my protagonist after she is married she is no longer called Donna. She is called DraDonna. It is highly insulting to refer to a married adult without the prename, it says to them that you still think of them as a kid. Not a parent or sibling or even the spouse calls someone by the childhood name. The only time it is acceptable to do so is between bonded friends and that is all. However there is a small and exclusive group of people who do not have a pre-name. These people are servants of the HEART or are in training to be servants. They don’t ever marry. So their names stay the same until they are ordained into the service of the HEART. At that time they are called by their office, like: Ambassador Symon. The servants of the HEART are always three people who are typically bonded in friendship as well.

As I am sure that you are able to surmise from this is that my teen characters have no choice but to be strong. In this world you are on your own at 18; it is the way it has always been in this world. I do however keep parents around. My protagonist’s parents are still around in book one: HEARTs children, and book two: HEARTs choice. But they are not what I would call chief characters, they offer advice and support but don’t really get too involved in the plot that surrounds the protagonist’s life.

Something I do to help create well rounded and believable characters is to do an extensive character profile on my blog.

The first thing I do is think about what I want the person to look like, then I look for a face. I search only in BING or GOOGLE images for pictures of actors. The reason for this is that I know these two sites give you permission to use the images, better safe than sorry when it comes to copyright infringement.

Now when it comes to the ‘face’ I always use actors that are well known to me. I have had some who have read my blog posts tell me that they didn’t like the well-known faces, but I have to have the picture of someone that I am familiar with because I need to know how tall they are, what their voice sounds like, how they move or walk. I can’t get that from a picture of some random model.

Now with the clear picture in mind I think of whom they are and what shaped their lives and the choices that they make, after I get a clear picture in my mind I search through songs and find 2 or 3 that I feel sounds like the character that I have written. I then put it all together by writing a little story blurb on the character, then I give details on the creation process, and explain the characters playlist. There are also other tidbits in the character profile blogs that are more for the reader than for character development.

With this I hope to achieve in my books, characters that are rich and well rounded. I want the reader to connect with them on an emotional level. When my characters hurt I want my readers to cry.

Thank you once again for having me on your blog Stephen it is an honor.

Happy writing and let your light so shine.

Please feel free to read all of my character profile blog posts at:

linnadrehmel.blogspot.com all are titled HEARTs children 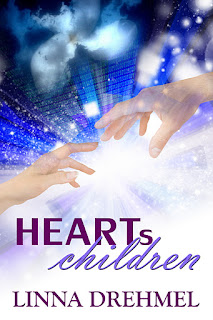 Posted by The Other Stephen King at 12:27 PM