"There is more treasure in books than in all the pirate's loot on Treasure Island." - Walt Disney 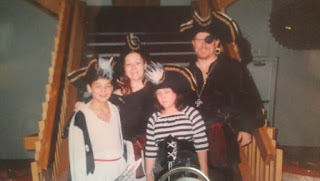 Avast, me hearties!  Shiver me timbers, mates, it's International Talk Like A Pirate Day.

On one level, the designation represents a lot of fun, as people wander around uttering dicey-sounding phrases and growls ("arrrrr...").  Some people, that is, of course.  I'm sure there are some who would applaud for a short while if the Dean wandered around campus referring to people as bilge rats and scupper-maids, but others would decry it as unprofessional and a distraction from the learning process.  And--they'd be right. Still, it's fun where appropriate.  From the official (more or less) web site:

Make no mistake. We do. But it's a little hard to articulate why, especially when you've made the mistake of referring to your wife as a scurvy bilge rat and tried to order her back into the galley.

Talking like a pirate is fun. It's really that simple.

It gives your conversation a swagger, an elán, denied to landlocked lubbers. The best explanation came from a guy at a Cleveland radio station who interviewed us on the 2002 Talk Like a Pirate Day. He told us we were going to be buried by people asking for interviews because it was a "whimsical alternative" to all the serious things that were making the news so depressing.

In other words, silliness is the holiday's best selling point.

The reality of pirates is pretty dark and ugly.  We've all been treated to media reports of small bands off the coast of Africa who, once they managed to put their hands on the lethal combination of boats and guns, ply the seas looking for death and destruction.  Other peoples' deaths and destruction, of course.  Nobody wants to talk like them, I think.

The fantasy of pirates, meanwhile, is--well, sexy.  All the men swagger like Captain Jack Sparrow as portrayed by Johnny Depp, and the women all look like Keira Knightley.   More to the point, since neither Captain Jack nor Will Turner do much for the holiday vernacular, all pirates in our fantasy world talk like Captain Barbossa.

Today is the day, then, that we celebrate the fantasy in our lives.  Go ahead and pay homage to the noble tradition of writers crafting people, places, and things that could never exist in the real world in order that their readers' imaginations can revel in them.  We're not just celebrating works like Treasure Island, but rather holding up an entire genre of fiction: thank you, authors, for bringing us pirates, elves, space cowboys, Wookies, and yes, even vampires who sparkle.

And talk like a pirate while you're at it, and smartly too, y'ken? Else ye'll walk the plank....

- TOSK
Posted by The Other Stephen King at 8:36 AM