"Those who expect to reap the blessings of freedom must, like men, undergo the fatigue of supporting it." - Thomas Payne

"The American Revolution was a beginning, not a consummation." - Woodrow Wilson 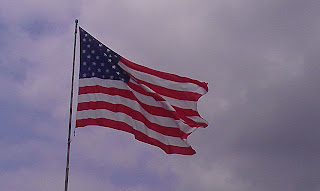 Happy Fourth of July to all of you! For those in America, I hope you enjoy the parades, the fireworks, the cookouts (it is okay to call 'em by the somewhat archaic, non-Food-Network term cookouts, right?). And as I told all my students and all my employees, make sure you stay as safe as possible, because for some people July fourth is synonymous with getting inebriated and then jumping behind the wheel. Be extra careful out on the roads today, as I'd also like to celebrate July fifth with you.

Today we celebrate what historians tell us is the anniversary of the adoption of the Declaration of Independence by the Second Continental Congress. By that point the Boston Tea Party had been, um, partied, and the Battles of Lexington and Concord had already been battled to a somewhat surprising (to the folks at the time) eventual victory for the colonists, while the Battle of Bunker Hill had been won by the British regulars but at an excruciatingly heavy cost. That, then, set the stage for a group of colonists (who, we can only assume, had just come to think something along the lines of "holy shit, we might actually accomplish this") to write a pretty heady bit:

We hold these truths to be self-evident, that all men are created equal, that they are endowed by their Creator with certain inalienable rights, that among these are Life, Liberty, and the pursuit of Happiness. - That to secure these rights, Governments are instituted among Men, deriving their just powers from the consent of the governed.

It continues, but what's relevant to this post is that this document served as the birth certificate of our nation.  And, for better or for worse, for all the great and all the dumb things this nation has done over time, I'm proud of that.

One funny thing is that 7/4 may not have been the actual date.  Some historians claim that 7/2 was the right day.  Had Fox News and MSNBC been running against each other back then, who knows what would've happened?  We might have had a revolt against the revolt.

To the United States of America: Happy Birthday.

To my friends and classmates in the USMA Class of 1989 ("We Strengthen The Line!"): It has and continues to be an honor knowing you and serving the nation with you.

To patriots, both past and future, who shed their blood in service to the nation: I salute you.

And finally, to everyone reading this, I remind you of these words: One nation under God, indivisible, with liberty and justice for all.

-TOSK
Posted by The Other Stephen King at 12:31 PM