Question: two cars are traveling exactly 1,000 feet apart, at exactly the speed limit of 55 mph.  They come upon a town where the posted speed limit is 45 mph.  The town is 2 miles long and, at the other end, the speed limit increases again to 55 mph.  Assuming near-perfect braking and acceleration (in other words, the time/distance for each car to drop to 45 mph and raise again to 55 mph is negligible), if both cars followed the law precisely, do they exit the town closer together, farther apart, or with the same separation as they had when they entered?

What's all that got to do with writing?  Not much, I guess, on the surface.  Hang on, though--those of you who know me know that I'll probably find a way to tie it in eventually.

I haven't blogged in a week, and boy, have I missed it.  It was a busy week, though, with my dissertation still hanging over my head, looming accreditation visits at work, a book to re-publish, and the trip to Roanoke, for SheVaCon, over the long weekend.  I got some of all that done.  Still working on cleaning up the files at work; those of you who haven't managed a college's preparation for an accreditor's visit don't know what you're missing.  It's not enough to be doing everything right according to their published criteria--and boy, is there a lot to be doing right--you also have to be able to prove it.  It's not enough, then, to have regular faculty meetings; you have to prove it with documentation including minutes and sign-in sheets.  It's not enough to have curriculum that's designed according to input from professionals in the community; you have to prove it with documentation including minutes of advisory meetings.  That's just two of the hundreds of criteria.  When the accreditors visit, they expect all this documentation to be organized and laid out in binders on the conference room table, in both tabulated and cross-tabulated format.  All that, and coffee service on a pretty little cart complete with a fruit bowl to nibble on.  "Normal" colleges *ahem*--universities and large community colleges and such--have compliance departments that do that pretty-pretty sort of thing on a more or less full-time basis.  Small career colleges have overworked deans and the incredible (yet also overworked) faculty and program directors who support them to do the same thing while still attending to the classes we teach.

Oh!  Oh!  I republished my book, Cataclysm.  I took Friday off in order to drive to Roanoke (a 3-hour drive, when it's not snowing), but Jessa didn't get out of school till after noon, which left me with a chunk of time to sit down and redesign the cover.  Here it is: 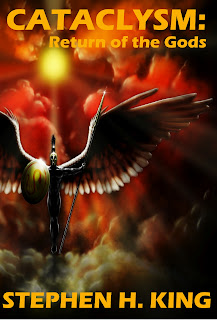 What do you think?  I'm proud of it, personally.  Granted, most of the prettiness of it was done by Tom Gehrke, but I'm proud of my own formatting of it into a book cover.

Republishing it wasn't hard; it's now available from Smashwords and Amazon.com.  Haven't updated my web site yet with links, but I will get to that today.  It's not available on B&N yet, and probably won't be for the foreseeably-near future.  Frankly, the work required to publish over at B&N is about twice the amount required for both Smashwords and Amazon put together.  I just have too many other things on my plate.

The next step is to get printed copies done.  That doesn't seem too hard, except that I have to re-do the cover art to submit an entire book jacket--front, spine, and back--and though that in itself isn't too hard it is another significant chunk of goal for me.  Soon, then, but not now.

I loved SheVaCon, by the way!  SheVaCon is short for Shenandoah Valley Convention, and it's held in Roanoke, which despite not technically being in the Shenandoah Valley is a great town to hold a Con in, and I'm glad I took the family.  It was our first real sci fi convention, and we came away with several things to do for next year.  Including, unfortunately, staying at the hotel.  Some wonderful friends, Raschid and Leslie (thanks, Leslie!) offered some bunk space at their house, and I gratefully took them up on it.  I wasn't thinking clearly, though.  What you lose when you stay with friends who aren't going to the convention is the ability to truly enjoy either one.  Leslie and Rash live in an old Virginia farmhouse on the outskirts of a town that's on the outskirts of Roanoke, and their place and their hospitality deserve--well, an actual weekend--to be enjoyed.  When you're leaving in the morning and coming back late at night, that ain't it.  Conversely, some of the more interesting convention-ish things happen at the hotel in the wee hours.  And I'll say more on that later.

All that said, Leslie is a fellow science major, as well as a fellow sci fi and fantasy geek.  She's also a role-playing genius, and has racked up more PC (player character) kills than any other DM (dungeon master) I know.  She went to school with my brother, and I met her back when online gaming meant play-by-email.  Back then, Leslie's DM'ing was legendary.  Once, she took out a King and all his retainers and guards as well as the ENTIRE party of gamers in what turned out to be the shortest game I ever played in.  But that's beside the point....

She's a chemistry major, just like my bro.  She's taught chemistry to engineering students, too, which is apparently as much of a challenge as is teaching algebra to nursing students.  She outright said that she hopes she never has to drive across any bridges designed by some of the future civil engineers who graced her classroom, a concern that has been mirrored in my own comments at times.

Then again, my own broader experience teaches me that it's normal for any student in any genre to complain about any general education class that provides a challenge, since students these days are focused on their own discipline so completely.  The "these days" wasn't particularly fair, either, since I suspect we whined about general education classes just as much way back in "the good ole' days" as they do now.  But hey, math and physics are my thing (when there aren't any good Microsoft or Cisco classes to teach, anyway), so that's where I'm going to feel the sting of the focus on core curricular content.

That, by the way, is where the question at the front of this came from.  I was racing the snow storm across Virginia as we returned from Roanoke to Richmond, and while not dodging snowflakes I thought a great deal on the apparent and somewhat-mystifying grave challenges presented by mathematics to students of all genres.  Only, sometimes the challenges aren't really mathematical in their nature.  I once had business and accounting students work a set of multiplication problems in a college math class, the core realization of the exercise being that the Moon doesn't really, technically, revolve around the Earth, and the students complained to my boss that I was making them do physics in a math class.  Such nerve I had!

The deal is, though, that the question at the top doesn't require math to solve.  I made the numbers up in a way that didn't risk trivialization of the problem (e.g., "the cars run into each other") but you can substitute just about any speed and distance combo in there.  You can even substitute metric numbers in there, if you're not from the United States, or if you are but you're one of the few Americans who's not scared of multiplication by .62 or 1.6.  You should, in fact, be able to work it out without doing a single equation.  It's a thought problem, which requires, by definition, thought, which is in turn one of those things I wish we all had more time for.

And on that note--I think I'll end this (hopefully before I make any other bad puns).  I'll talk more about the various aspects of SheVaCon later this week.

-TOSK
Posted by The Other Stephen King at 2:23 PM