"...nothing so liberalizes a man and expands the kindly instincts that nature put in him as travel and contact with many kinds of people." - Mark Twain

TOSK says: Today we're in for a special treat. When Kai Wilson put together a Great Indie Reads blog hop, I jumped at the chance to interview another author because I'm always curious to see what makes other people as crazy as I was to complete a novel. The guy she paired me up with, though, is fascinating--a well-educated and well-traveled man who's written some great mystery stories. I'd say more, but there's no point stealing his thunder.

Hi there (Jerry), please tell me a bit about yourself.

I'm a Professor of Pulmonary and Critical Care Medicine at the University of California's Medical School at Davis, near Sacramento in Northern California. I have a Ph.D. degree in Biochemistry and do research in asthma and health effects of air pollution on the lungs. (at which point TOSK interjects: holy crap!  I don't know what the "typical author" would be, but he sure ain't a Ph.D. in biochemistry.)  My lifelong hobby has been reading mystery novels, especially the California mystery novels of my favourite authors, Raymond Chandler, Ross MacDonald, Michael Connelly, Walter Mosley's Easy Rawlins series, and Robert Crais, and wandering out of California, Robert B. Parker's Spenser series and James Lee Burke's Dave Robicheaux stories. My interest in writing my own mysteries came from reading the masters and from a Freshman seminar I taught for many years at UC Davis on California Mystery Novels. The setting for my novels thus far has been South America, especially Uruguay and Northwest Argentina, both places we lived during a sabbatical I took several years ago. I've been back to Montevideo and Salta several times since then for collaborative research and teaching programs there, so I know the locales, the food, and the people I use for the books. Novels to come will be set in Chile, Peru, and Brazil, all places I have spent time in thanks to the various scientific collaborations that began during our sabbatical leave.

I try to write books that are fast moving and entertain the reader while introducing the readers to a region where I've lived and worked that is a long way from home for most English speakers. Montevideo, Salta, Machu Picchu, and Iguazu Falls are characters in these books, and the novels will succeed for me if some of you say that you'd like to visit these places because they seem so vivid and real. There is absolutely no goal to write "The Great American Novel" or even literature. I believe my strengths are in inventing interesting plots, paying attention to story details, and trying to entertain the reader.

And how about your latest book? 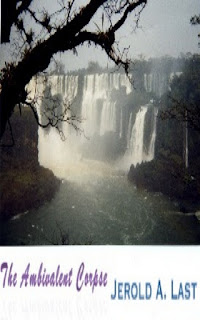 "The Ambivalent Corpse" is set mainly in Montevideo, Uruguay. The premise is that our heroes find parts of a dismembered corpse on a rocky stretch of beach in Montevideo, apportioned equally between the Memorial to a German cruiser sunk in World War II and the Memorial to Jews killed in the Holocaust. Because of the murder victim's strategic location shared between two antithetical monuments, the Uruguayan press names her “The Ambivalent Corpse”. Private detective Roger Bowman and his girlfriend, scientist Suzanne Foster, find themselves travelling through Uruguay, Southwest Brazil, and parts of Paraguay and Argentina to help solve the case. This fast paced mystery has plenty of action, atmosphere, and sense of place. It has received an average of 4 stars on its Amazon reviews thus far. While the novel is basically a hard-bitten mystery story, it bends the genre slightly so that it should also appeal to readers interested in travel, romance, and South American food and wine.

I actually got the idea for this book's title and basic premise when my wife and I took a walk in Montevideo in 1999 and I saw that strange juxtaposition of the two monuments. It took a while for me to find the time to sit down and start writing the book.

Where can people get this book?

For Kindle folks, the book is on Amazon. For other E-readers like Apple for iPads and iPhones, Barnes and Noble for the Nook reader, Kobo, and just about anywhere else, directly via Smashwords.

Is it your first book?

This is my second book, and is part of a series featuring the same two main characters, Roger and Suzanne. The first book, The Empanada Affair", is set in Salta, Argentina. It was inspired by our living in Salta and eating lots of empanadas, especially for Sunday brunches at The Casa de Empanadas, which I borrowed for a critical scene or two in the book. A third entry in this series should be published on Amazon and Smashwords some time early in 2012. It is set in Peru and Northern Chile, and is titled "The Surreal Killer". The title is intended as a pun on the theme of the book, the search for a serial killer.

How are you finding self-publishing now you’ve published more than one book?

As I'm sure you've heard before, self-publishing is the easy part. Promotion and marketing have taken me and all other Indie authors into a whole new world, which is changing rapidly. I am suddenly on Facebook, which I swore would never happen, and being interviewed here about something other than my science, which is a new experience for me as well.

Who is your favourite character?

There are parts of me in both Suzanne and Roger, my lead characters in this series. Suzanne is the professional me, and I try to take some pains to make her science plausible if not actual. Roger is the less professional me of imagination, especially his proclivity towards puns, and his last name, Bowman, is derived from Ross MacDonald's immortal P.I. character, Lew Archer.

What’s your favourite indie book that you’ve read in the past 12 months?

"The Ambivalent Corpse", of course.

What’s your favourite book of all time?

It would probably be one of Ross MacDonald's. For today, I'll pick "The Chill".

Do you use any groups or mailing lists? Wanna tell us about them?

Any advice for new writers?

1. Be prepared to spend a lot of time trying to make people notice your book, especially time on the Internet.

What’s next for you?

Finishing the editing and proofreading for "The Surreal Killer", publishing and promoting it, and then on to book #4 in this series, which I think will be set either in Fortaleza, Brazil or Santiago, Chile, both cities I've spent some time in. I'd like to take advantage of my wife's expertise in dog breeding and dog showing as the backdrop for one of these books if I can make that work.

I'd love to see some of you pick up a copy of the book, read and enjoy it, recommend it to your friends, and write a good honest review that you publish wherever you purchased the book. Your feedback will help me sell my books to a broader audience, and at the same time help make me a better writer.
Posted by The Other Stephen King at 12:01 AM